Mustang-Cam! - My Debut on You Tube

You probably know that I'm a huge fan of the Ford Mustang. A couple of months ago my big bro gave me a cool remote control 1967 custom Shelby Mustang model. Since then I've been planning to make a video with it. What I wanted to do is to create a sort of carriage to attach the camera to the back of the ride, and then shoot the video while I control the car, which would give a NFS-like view. To hold the camera (Nokia 3250 in this case), I made something more like chariot, I named it 'Cam-Chariot', and attached it behind my Mustang. 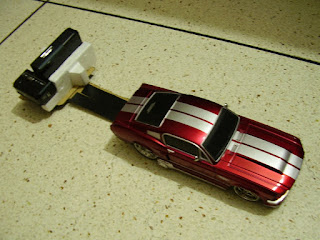 The Mustang with the Cam-Chariot 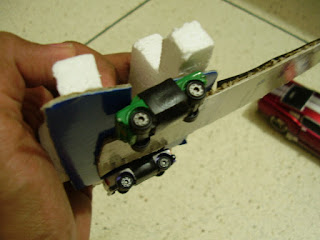 Now the only thing left was to drive it with the camera chasing it, and that's what I did. The video also featured some cars and bikes from my bro's collection. After shooting the video I went one step further, putting it up on You Tube. This is my first video on You Tube so I was pretty excited to see my own work on-air. I know it's just a crappy video with stupid quality and nothing spectacular, but I was pretty happy with the way things worked out. I've embedded the video right here. I hope to direct some more sequels of my soon-to-be blockbuster, hehe.

I know what you're thinking, doing all these stupid stuff with kid's toys, it's all just too childish for a 22 year old. Maybe you're right, maybe it is childish, but....."Frankly my dear, I don't give a damn!"