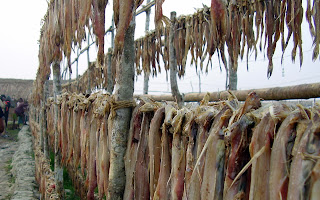 The last day on our trip to The Sundarbans started on an island called Dublar Char. This is a place famed for its shutki, a kind of dried fish preparation popular in Bangladesh. Right after daybreak we got out on the land to check out the place. This area is occupied for a certain period of the year by fishermen who catch fish and dry them up to produce the shutki. So almost all the people who live here are seasonal fishermen. Now in our family, we never were fans of shutki, mostly because of its awful stench. I remember back when we were in Elephant Road, our next door neighbors used to cook shutki every now and then, and we all started running this way and that, hurrying to close all the windows. So for a guy like me, this shutki island is not the place to be. If you don’t like the smell as well, you should be glad that you can’t smell them through the photos, cuz otherwise you would have to run away from the monitor. Rows upon rows of bizarre looking dried fish are hung upon strings throughout the place, and they smell much worse than they look. Many of the guys in our group are fans of shutki, so for them this place is the ultimate wholesale market. So when we got back on the launch, our rooms started to stink as well. Only if I could switch off my olfactory nerves.

Check out some photos from the tour on my Picasa Album.