The sun was shining bright in the winter morning when we reached Katka. This place offers a whole set of varying experiences. We had to get into our boat again at first and head into a canal for a short distance before we came to a landing spot from where the walk towards the sea beach started. This walk of about 45 minutes is a fun ride by itself. At the beginning the forests were at a pretty fair distance on either side of our path, as our caravan of 63 with the two armed gunmen at the front and back walked deeper into the region. Soon the tree-lines started to close in on us. And then came the spot called Jamtoli, were the path only allowed a single file, and the tree branches and bushes brushed us from the sides. Now, these parts of Katka are famous for spotting tigers and a considerable number of tigers are believed to be living in and around this region. This is the area where the famed tigress ‘Jamtolir Raani’ (The Queen of Jamtoli) was spotted. So passing through this narrow jungle path was a thrilling ordeal. Some of our folks even claimed to have heard the roar of a tiger, which most others refuse to believe due to our reputation for ‘honesty’. 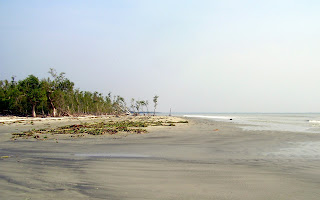 The last time I was at a sea beach was back when I was six, so it’s almost beyond my memory. Walking for several more minutes, I couldn’t yet see the beach but I heard the sound of waves hitting the shores. Few more steps and I saw it. Running into the sand with my shoes off, I looked around in utter amazement. I never expected to find such a beautiful sea beach after a walk through dense forests. The change of view was striking, and yet it blended perfectly into the backdrop of the jungle. No artist but The Almighty Creator could paint such a beautiful picture. I knew I had to throw myself into the waves, so I quickly took some snaps, put away the camera, and ran straight for the sea.
Maybe ‘ecstasy’ is the right word to describe the feeling I had when the waves engulfed me from all around, and I felt the sand quickly shifting away from beneath my feet. I’ve always had a fear of open water. Despite learning to swim about 6 years ago, I could never get comfortable at the sight of deep water bodies. But strangely I found myself giving up my body into the waves. Almost everyone was having a dip in the sea. And those who were trying to avoid getting soaked found no shortage of helping hands. Even the over-cautious Kanto was ambushed, picked up, and dumped into the water. I was almost ready to get out of the water when Aninda called me. He told me it was great fun to dive head on under the water just as the waves hit, face first. So I gave it a try. I was facing the wave, put my head down, the water embraced my head from all sides, and I got up. Yeah, it did really feel good, but I noticed something strange, I wasn’t seeing things right anymore. It took me an instant to figure out I was missing my glasses. I groped uselessly under the water for some time, but to no avail. Dear Bay of Bengal, consider it as a parting gift (it was a little forceful though). 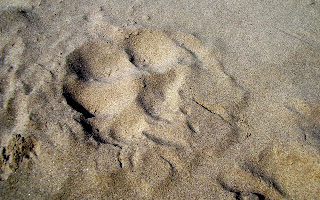 I don’t know how much time we actually spent there on the beach. It made me lose track of time. Before we left Katka, as a bonus we were lucky to see a trail of fresh footsteps of a tiger on the sands, near the line of trees. The walk back towards the boat was a bit of a hurdle for me as I was missing my high powered glasses, without them I’m kinda quarter-blind. But still on my way back I climbed up the 4 storey watch tower to get a view of the area from up above. By noon we were back at the launch.
Probably the most thrilling episode of our entire tour began at the evening. It was the time of low tide in the rivers. It is a common occurrence in the rivers for a boat to get stuck on the uplifted sandy plane on the river bed during these times when the water level gets really low. That’s exactly what happened to us. As our ship’s crew found out that there wasn’t enough water under the hull for the ship to run, they tried to turn the boat around to avoid getting stuck. That made matters much much worse. A portion of the front part of the ship went over the muddy river bank on one side, and our launch was stuck like hell. The position of the launch was so unbelievably weird that anyone (or anything) could just walk into the launch from the river bank. We had nothing to do, no way to move until the high tide comes and the water rises again. At first we all got a bit tensed from the thought of a tiger walking right into the ship. When we asked our guide Tapash bhai about our fears, he said we shouldn’t worry about tigers, but he was afraid of something much worse. Pirates! 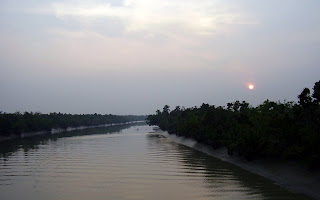 The forest is home to about a dozen separate pirate groups. These are not your movie-type pirates with eye-patches who says ‘Arrrr…’ and stuff like that. These pirates are more heavily armed then you would expect, and lives in boats in the numerous canals. We got to know from Tapash bhai that we were stuck in the region of one of these pirate gangs. The forest officials know these pirates by names and know their whereabouts very well, so Tapash bhai himself was acquainted with many of these pirate chiefs. Moreover he told us that the pirates haven’t attacked any tourist group for more than two decades and mostly rob local fishermen. But still he was extremely anxious about our safety, because the pirates, he said, in his own words, “have no religion”.
Probably a writer like my favorite Henry Rider Haggard would find the perfect words to describe the intensity of the next couple of hours. But unfortunately my writing skill is no match for such a situation. Gone was the hum of the engine, the moon was still not up, the darkness around us seemed more black than we had ever seen. Our launch with our group of 63 plus the crew, was stuck on a land with dense jungle at a remote location of The Sundarbans, in the pitch black night with dark water all around us. There was an eerie sense of tension among the people, trying to keep the mood light, yet in tensed anticipation of the unknown. Chatting to ourselves, we had our eyes fixed on the water. Despite simple logic and Tapash Bhai’s word that the pirates would never try to approach by boat, the faint glows of distant lights on the water made us skip a heartbeat.
After a couple of ours, our launch started to move again. It sent a hushed relief through the whole crowd. But it wasn’t over yet. After a few minutes we found ourselves drifting towards the bank on one side, and the launch got stuck, yet again. This time, we got even more confused. We knew our ship was moving down the middle of the river branch, and yet for some reason it got pretty close to one side again. All sorts of conspiracy theories started brewing up in the minds of the guys, fearing if the ship’s crew had something to do with this. But thanks to Allah it was nothing of that sort, and soon afterwards our launch started to move again. Once we got out into the larger river, the suspense of the night was finally over, and we all could breathe a heavy sigh of relief.

Check out some photos from the tour on my Picasa Album.