This just shows how good I am at procrastinating, it took me a month to start writing a blog post about my Nepal tour. At first I thought I'd make a really descriptive post, but I'm just too lazy for that. So I thought I'd make it a photo blog instead. Makes the job much easier for me since many of the shots are already uploaded in G+/Picasa. Click on the photos to get larger views in a new window, there you can also drop your comments on the individual photos.


My father is the kind of a person who doesn't wanna wait for something he's decided upon. It might be really hard to convince him into something, but once it's set in his mind, he just can't wait. So when one fine noon he casually informed me that they (my parents) are going to Nepal within a few days and I should let him know if I wanted to accompany them, I knew it was just a matter of time, and a very short time at that. So I was off to making a list of places to visit :D. Also, since I didn't have any camera of my own (I know, it's pathetic), I called my photo enthusiast uncle to reserve his Nikon D40.

The only place inside central Kathmandu that's really worth visiting, from a photography point of view, is the Garden of Dreams. It's a decent looking place with various sorts of plants and Greek/European style architecture (yeah, I'm not very good at recognizing those). To someone with a photographic eye (not me), this place can provide some good shots. 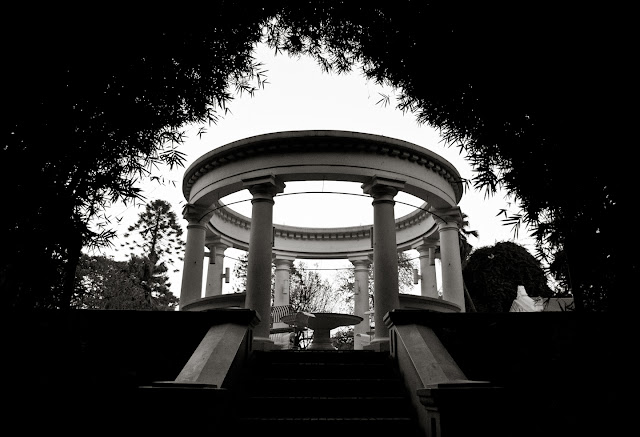 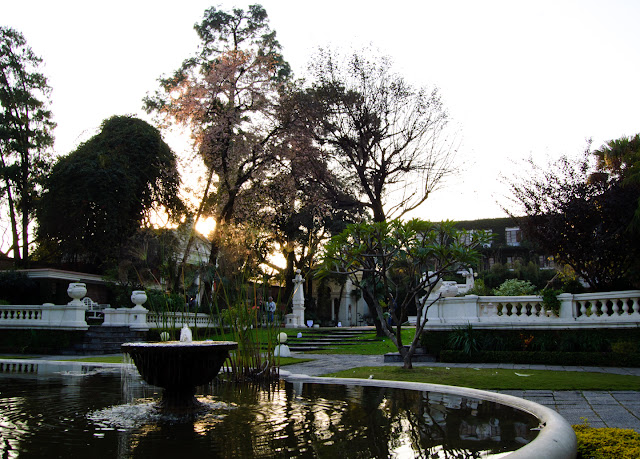 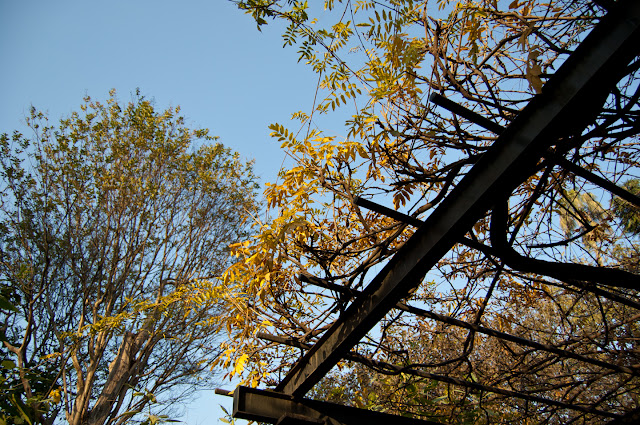 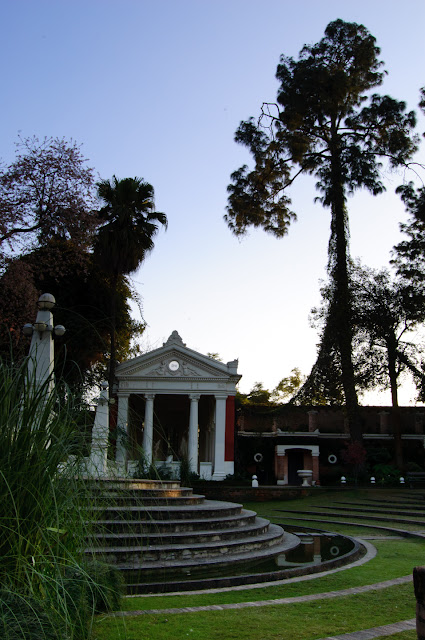 Looking at the aircraft that was gonna take us to Pokhara from Kathmandu airport, I had mixed feelings. It was small, a toy like thing with about 40 seats, and looked adorable. And that's the very reason it scared me as well. But after it was airborne, I soon forgot to worry about anything. The view of the mountain ranges on the horizon was stunning, and I kept snapping with my D40. The trip was supposed to take just 30 minutes, but it was actually even shorter. The driver from the hotel was already waiting for us, and we took a 10 minute ride to our hotel. And those 10 minutes told me one simple thing; Pokhara is beautiful.

Pokhara is quite simply the opposite of Kathmandu. The air is pure, the streets are clean and wide, and the the city is surrounded by magnificent mountains and hills all around. Our hotel was very close to the Phewa Lake, and the 4th floor restaurant provided an absolutely stunning view of the adjacent lake, hills and mountains. Walking up the winding road that goes right beside the lake is very pleasant. There are bicycles for hire which are available throughout the lake side, which is a great way to roam about the place in the afternoon (which I did, later).

After a quick rest, prayer and lunch at our hotel, we headed out with our driver cum tour guide, a jolly guy named Mathura, towards Devi's fall. Reading about visitors' experiences and seeing some photos of that place before, I wasn't expecting a lot from there. But I was proved wrong as soon as I got the glimpse of the fall. It's not your typical waterfall falling from a great height giving a majestic view. Rather it's an expanding section of a rapid, falling down below to a great depth. What really makes this place absolutely breathtaking is the blazing speed of the water. The sound of the rush is deafening, and the water stream drops a long way down to a deep dark well-like opening into the rocks, from where sprays of water come up to meet you. The purely white water, it's intense speed and the sound of the rush is something that you really have to feel by standing there in front of the fall, and cannot be comprehended thorough photographs on a 2D plane. Still, being a newbie photographer I tried my best to capture the beauty of the place. 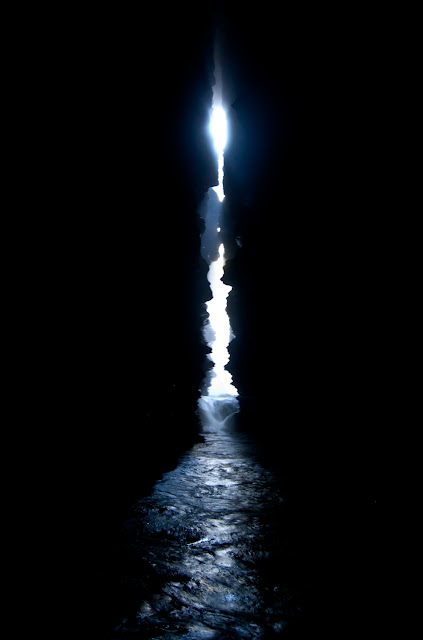 Right across the street from Devi's fall is a cave called Gupteshwar Gupha. The cave is divided into two parts. The first section leads down into a temple, a very revered place to Hindus. From that level, the cave winds further down, deep into a place where the water from Devi's fall can be seen rushing in from an opening in the rocks, running on towards an underground river below your feet. The view at the very bottom is stunning. The ceiling of the cave opening is too high to be seen, and whole place is deep dark except for the jagged opening at the further end, a crack in the cave as high as the ceiling itself. The water from the violent fall is seen gushing in through the enormous cave, with equally blazing speed, running underground to some place unknown. Through that fissure in the cave, nothing can be seen except the white foamy water surging in. It was quite a feeling to be there, and I really wish I could just be there by myself, for some hours, just looking at the shaft of light out of the darkness, listening to the sound of the flow. Maybe someday I will.

If you look at the map of Pokhara, you’ll see that the Phewa Lake dominates the city. Not only because it’s big, (because Begnas Lake is probably bigger) but because it’s at the very heart of the city and around this lake have the hotels and the shops sprung out. It’s reputed for its view with the surrounding hills and the gorgeous view of The Annapurna Range including the famous Fishtail Mountain (Machhapuchhare in local lingo), which is clearly visible from the lake on a clear day. The reflection of the whole mountain range on the lake of the water in probably the most common photo you’ll see in Nepalese souvenir calendars. In the afternoon of the first day at Pokhara, we went out for a boat ride on the lake. Although we couldn't really see the mountains due to clouds, the hills on both sides of the lakes made a pretty decent view. Many boats, painted with festive colors and driven mostly by local women, goes out into the lake packed with tourists. Hindus also go to the Barahi Temple, which is placed on an island in the lake.


The next day we headed out right after our Fajr Prayer towards Sarangkot. This place is famous for the view it provides of the sunrise over The Annapurnas, Phewa Lake and the whole beautiful Pokhara valley. But, you need a very, very clear weather for that kinda post-card view, which I didn't get. Although I couldn't see the mountains at all, and the lake was hardly distinguishable from the land due to heavy fog, the sunrise at Sarangkot was a pretty enjoyable one. Using the 55-200mm lens at sunrise, and also for the fact that I wanted to shoot some HDR, I had my borrowed D40 and tripod all set up, ready for the sun to wake up (I was expecting quite a few of the other tourists to set up there gear as well, but they seemed quite happy going handheld). 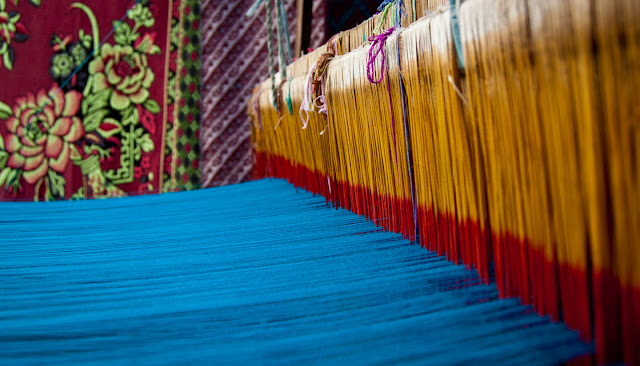 Next on our itinerary was the Chameru Cave, more popularly known as the Bat Cave. Well the name says it, it's famous for its bats. Three different species of these nocturnal mammals live in this cave which attract not only random tourists but also biologists and bat enthusiasts from around the globe. Walking downwards for quite a long way through rough hewn steps, I reached an enormous hall in the cave. It's pitch dark in there, and we only used very dim FTL lights to watch our steps. Pointing the lamp upwards, the light faintly reached the high ceiling above, and I saw that the ceiling was covered with bats. Following my guide I climbed my way upwards, which took me very close to ceiling at one stage, bringing me up close with the sleeping creatures. But the most memorable part of my time at the Bat Cave was not the bats themselves, but the final bit of rock climbing that I had to do get out of the cave. It was a really, really tight upward climb which at first seemed quite impossible for me, having no experience in climbing rocks at all. But my guide (who's actually a varsity student doing part time job here to cover his tuition) assured me, and climbing up himself first, he gave me very clear instructions on where to keep my hands and feet. Bending my body to positions I never thought was possible by me, I finally squeezed out of the hole into daylight. It was awesome! 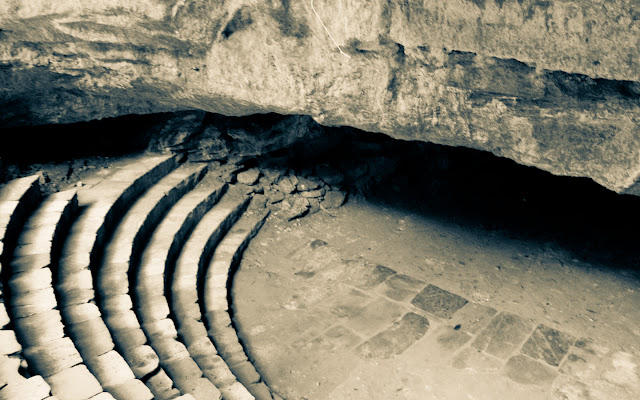 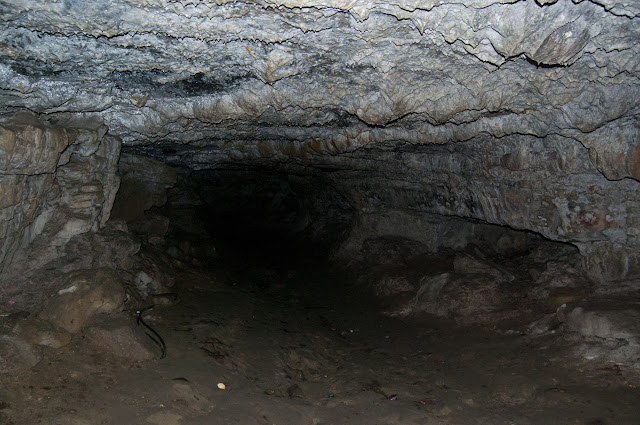 After the Bat Cave we also went to the Mahendra Cave, which was nearby, but since our day was already getting quite tiresome, we didn't really explore it beyond a few steps. I didn't have the experience or the gear needed to shoot in the situations that are found inside the dark undergrounds, so I can't provide good enough shots from within.