The Sundarbans 2009 - Part 1: The Unforgettable Tour

I’ve been in trips before, and Inshallah I’ll be in a lot more in the future, but last week’s trip to The Sundarbans was one that I’ll remember most when I look back at my life. This trip was a lot of things together. Other than being a tour of absolute visual pleasure at the sight of the rivers, the sea and the forest, this trip will probably be more remembered as the trip that brought every one of us together, the students of EEE, AUST, final semester. Our caravan consisted of 61 students from all four seasons…… I mean sections, hehe, and also two of our respected teachers. Doesn’t sound like a big crowd, but I am still amazed that our group has gone through the tour with such a degree of order and unity. There’s a reason why I typed in ‘four seasons’ a little earlier. Every section of our semester and every student in each is so strikingly different and have such diverse ideas that I can’t help thanking The Almighty Allah that our tour was such a pleasant one. I don’t know how the others feel, but I feel like I’ve rediscovered my classmates in the four days of the trip. Sounds nerdy right? Guilty as charged.
Enough of serious talk, let’s look back at the trip. May be we all had a course-ending tour brewing in our minds for a long time, but this tour was the brainchild of Pulak, Imtiaz and Tanim. I can’t give you the details on how everything was planned cuz I wasn’t involved with the planning part. All I can say is, they left no stones unturned. From our transport to food and beverage, every tiny detail was taken care of. These three along with Nobin went to Khulna a day ahead of the rest of the gang, to do all the shopping and other arrangements. Nobin’s the kinda guy who’s more useful for keeping you in a joyous mood than for doing any actual physical work. He sometimes throws gags so irritating that you really wanna hit him hard, but you can’t, cuz you’re already LMAOed. Anyways, The rest of the group got into the train from Dhaka on the night of the 2nd December. Almost one whole car of the train was occupied by us rodents. A ten hour long journey on a train may sound boring at first, but most of the guys were awake for most of the time with the typical gossiping and ‘pochani’ sessions. I enjoyed the train racing through the night, with the full moon shining through the windows. We crossed the famous Hardinge Bridge over the river Padma and the Jamuna Bridge as well.
Our train reached the Khulna station on time. The BIWTA Launch Station was just a 3 minute walk from there, and that’s where our launch was waiting. The whole boat was rented for us only and we got into it at the time of Fajr, on the 3rd of December. 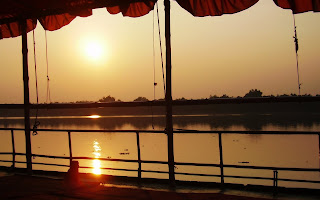 Our journey towards Sundarban started at 9:30 in the morning. Soon after we started, the scene around us started to change. The banks were getting further as we traveled south over the river. We passed the range of the Mongla sea port a couple of hours later. Very soon after that, all we could see ahead was the line between the sky and the water, and the deep green of the forests started to dominate our line of sight on either side. We were heading into The Sundarbans.
Click here to check out some photos from the tour.
Email Post
Labels: AUST Bangladesh Break Friends Photos Sundarban Travel