On the Path of Revival - Part 2

Ibn Abbas Radiyallahu Anhu narrates that Rasulullah Sallallahu Alaihi wa Sallam said: Today you listen to me about Deen; tomorrow you will be heard. And then it will be heard from those, who heard from you. (Abu Dawud)

Although I’ve been acquainted with Tabligh for several years now, but only after going in this jamaat that I finally got to see and participate in the Dawah activities in full swing. The effort that is going on in the name of ‘Dawat-e-Tabligh’ in every corner of the globe now is the effort to re-establish the missing bond among Muslims. Deen cannot be rejuvenated in the hearts of the Muslims without the proper understanding of Allah Subhanu Ta’ala. So our Dawah consisted of just that, to remind the people of Allah’s identity as the controller of the whole creation. The goal of the Dawah is not to preach to others and give Hidaayat, but to acquire Hidayat from Allah for ourselves by preaching the very words that we want to set in our own hearts. Once this purpose of Dawah is clear, you’ll never be disappointed or grow tired in calling people towards Allah. The urge to improve your own Imaan and set your Yaqeen straight will drive you onwards.
So wherever we went in Khulna, we got totally blended in with the local people. We stayed in a total of twelve masjids in and around the main Khulna town, so that’s a dozen different localities. In the period of forty days, me and my Saathis (it’s a norm in Tabligh to call another fellow Tablighi a ‘Saathi’ which means companion in the dialect of the subcontinent) got acquainted with numerous people, and we truly got acquainted with them. I mean we didn’t only get to know their names and whereabouts, but they truly became our brothers. Even when we changed a masjid and went over to the next one, the connection with the people of the previous area were not hampered, we would often visit them, keep in touch over the phone, and often they would come over to our current masjid to join us for lunch or dinner. Even now after almost two months, I call many of them back in Khulna regularly, and they call me as well.
In each of the areas we visited, there was a great stir in the place due to our work there. Thanks to Allah, all the members of our jamaat spent a lot of time in Gasht (preaching walks), talking to people in all sorts of places. Houses, tea stalls, shops, student dorms, you name it, we’ve been there. So within the very first day of our arrival at an area, the local people were well aware of our presence. And I must admit, I loved the people of Khulna. The hearts of the people are much softer compared to the stone cold people of Dhaka that I’ve come to see for all these years. In attitude they are much more cordial and polite, and more importantly they are eager to listen whenever the words of Allah and Islam are spoken to them. The foundation of our bond with the people of those areas was the Dawah towards Allah, and when you love someone for the sake of Allah alone, the bond that’s created is the strongest. So we totally blended into the lives of those people, who were just a few days ago total strangers to us. This is indeed a very basic necessity of Dawah, to create a true brotherly connection with the Ummah. Once that happens, the work of Dawah becomes much easier and fun, and the effect becomes more prominent. Thanks to Allah, through our work there, twenty four people returned with us to Kakrail for the purpose of spending time on the path of Allah at the end of our time in Khulna. Among them were brothers from varying levels like students, businessmen, government officers and even a renowned Mufti of Khulna. So, we went to Khulna sixteen men, and came back forty!
Email Post
Labels: Bangladesh Break Khulna Tabligh Travel Trip 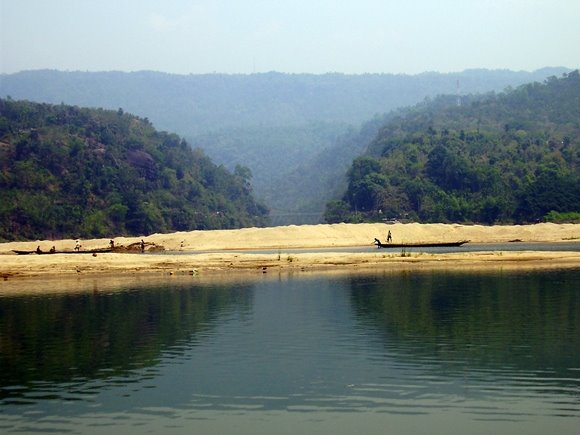